The Harvard Center for Green Buildings and Cities (CGBC) has retrofitted its headquarters, a pre-1940s building in Cambridge, MA, into an ambitious data-driven living-laboratory that will help us to understand buildings in new ways. A first-of-its kind test case, it also functions as a prototype for ultra-efficiency. Targeting the most rigorous efficiency standards ever achieved by a building retrofit, HouseZero has the following performance goals:

How does HouseZero function as a living-lab and why is it data-driven?

HouseZero’s unique infrastructure—or “brain”— contains several miles of wire and hundreds of sensors (some for data collection and some for building operation). Embedded within each component of the building, data sensors will produce millions of data points each day.

This data will inform the algorithms within building software, which will prompt the building to adjust, reconfigure, and harmonize its daily operation based on future weather forecasts. This will allow us to control the indoor environment without building systems (HVAC). Data and computation will also allow the CGBC to understand complex user-behavior in new ways, fuel research involving simulated environments, and develop new systems and algorithms that incorporate building complexity and promote energy-efficiency, health, and sustainability.

The third-floor of HouseZero features a flexible, highly-controlled and monitored experimental space—dubbed the LiveLab—which is hardwired to the building’s energy exchange system. Because the LiveLab is connected to an ultra-efficient structure, the space will allow for the testing, swapping, and optimization of new technologies (Yes, the LiveLab is, essentially, a “lab within a lab”). An immediate goal is to ‘beta-test’ new technologies that can eventually replace the building’s ground source heat pump for peak conditions.

What is HouseZero’s primary design motivation?

The CGBC believes that the green buildings of the future should embrace an ecological approach rather than an engineering dominated approach. If we allow our solutions to be inspired by ecosystems, buildings might be treated as living organisms that can breathe and adjust themselves relative to their surroundings. This represents a fundamental paradigm shift that could have enormous implications for the environment and the human condition.

As such, HouseZero works to fundamentally redefine how a structure can connect with and respond to its natural environment to promote efficiency and health. Rather than approaching the house as a “sealed box,” the building envelope and materials of HouseZero were designed to interact with the seasons and the exterior environment in a more natural way. The building will adjust itself seasonally, and even daily, to reach thermal comfort targets for its occupants.

During the design process, several fundamental decisions focused on our ability to harness natural ventilation potential full-time, given its ability to substantially reduce energy use and improve thermal comfort. This presented a significant challenge because any reliance on our external environment adds increased levels of uncertainty (while traditional HVAC systems allow us to reliably monitor temperature and air-flow).

CGBC-driven advances in energy modeling allow us to more accurately predict the natural ventilation potential of our local environment, which ultimately allowed our designers to make more informed decisions. By using computation and simulation to demystify building behavior, we were able to marry the ecological approach with the same level of accuracy as a mechanically driven structure.

Why focus on existing buildings?

Even before the 2015 Paris agreement to curb global warming by 2050; it was understood that the building industry alone accounted for 40% of all worldwide energy use and thereby 40% of all global GHG emissions from the production of that energy. In developed countries, roughly 65% of the total expected building stock in 2060 has already been constructed (http://www.worldgbc.org/sites/default/files/UNEP%20188_GABC_en%20%28web%29.pdf).

This demonstration project attempts to address the global environmental challenge of climate change by focusing on one of the most challenging building types—inefficient existing buildings—which account for vast amounts of energy use and carbon pollution worldwide. While numerous new buildings have achieved net-zero or positive-energy performance goals, the retrofit potential of the current U.S. building stock has not been thoroughly explored.

As such, the CGBC intends to demonstrate that by coupling current technologies with better design, retrofits of our existing building stock can, indeed, achieve rigorous energy efficiency goals. By retrofitting the current building stock in the United States to achieve even some of HouseZero’s radical efficiency standards, we can achieve significant energy savings, which will translate into billions of dollars in savings per year.

By creating both a prototype and an infrastructure for long-term research, the CGBC hopes to raise interest in ultra-efficient retrofits and inspire substantial shifts in the design and operations of buildings.

How can a building really have no need for an HVAC system and electrical lighting during the day? 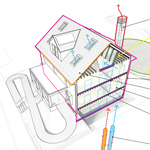 Can anyone with an old building really do the same thing?

We hope to prove that HouseZero’s approach is replicable. Some of HouseZero’s upgrades are solely required to transform the building into a functional office for up to 20 researchers and staff, but most enhancements to the existing building are viewed through the lens of the renovation market. The CGBC believes that the best ideas should be transferable to other building owners as a recipe for significant energy and carbon use improvements to their existing structures without costly or wasteful tear-downs. While a building owner may not be able to implement every aspect of HouseZero, applying one or more of its components could positively impact its environment, the health of its occupants, and building operating costs.

How will you prove that the building performs as intended?

HouseZero’s embedded sensors will allow the CGBC research team to monitor the building’s thermal environments and its operation. The CGBC intends to release this data on a public platform.

The unique challenge to communicating the value of any new work of architecture is the critical role that time plays in determining its successes and failures. Like the work of any creative discipline, buildings may also accrue certain historical and cultural significance over time. But unlike other disciplines, architecture is unique in that buildings must also perform. Space, function, materials, structure, circulation, ease of maintenance, durability – among others, how buildings behave over time in these areas greatly affects their long-term utility, operability, and critical reception within the discipline and the public at large. This is especially true for new buildings that hold environmental sustainability as core to their purpose. Yet, rather than understanding their long-term performance, public discourse around sustainable buildings seldom extends beyond initial discussions of a project’s ambitions – ambitions that are seldom tested against rigorous post-occupancy evaluation, for instance. Or when they are evaluated, this new knowledge is seldom shared. So while living laboratories like HouseZero attempt to address those gaps in our knowledge on the individual building scale, the research collected and produced is also intended to feed back into everyday applications of energy-saving retrofit strategies that can inform the building industry at large.

How does HouseZero achieve zero energy and zero carbon emissions?

While very little energy is needed to run the house, the roof incorporates photovoltaic (solar) panels to provide renewable electrical energy for the heat pump as well as for energy required by user equipment. A battery system is employed for night time use and low-sun conditions.

In order to address proposed emission cuts of the Paris agreement, HouseZero goes further by offsetting the hidden emissions generated throughout the building’s life cycle: from the fabrication and transport of building materials and construction processes to its replacement. The production surplus is dimensioned to completely offset carbon emissions from the equivalent energy used throughout the intended lifespan of the house including embodied energy for construction materials and building operations for over 100 year life-span. This surplus clean energy is to be fed back into the grid.

The estimated embodied carbon in HouseZero is 4.9 kg CO2/m2/year, based on a 100-year service life assumptions. This number excludes batteries and portions of the solar vent and the geothermal system, both of which have been allocated proportionally to the future underground extension of the building.

How is this different from LEED certified building or a Net Zero building? 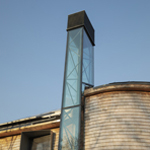 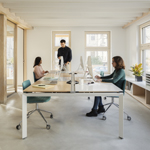 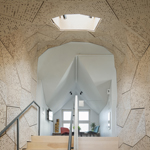 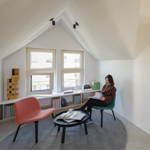