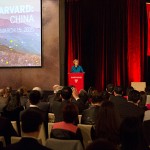 Harvard President Drew Faust joined more than 430 alumni, faculty, and friends on Sunday to celebrate the University’s long and growing ties to China. The gathering was the latest in a series of Your Harvard events across America and around the globe, organized by the Harvard Alumni Association (HAA) to engage graduates in the future of the University.

President Faust’s remarks followed a panel titled “A Lens on Research: New Ways of Seeing the World,” featuring Xiaowei Zhuang, the David B. Arnold Jr. Professor of Science at the Faculty of Arts and Sciences, and Ali Malkawi, professor of architectural technology at the GSD and founding director of the CGBC. George Yeo, M.B.A. ’85, moderated the discussion.

Zhuang’s research focuses on developing new methods for scientists to see the very small structures inside human cells, in the hope of better understanding cell biology and ultimately discovering new approaches to combatting cell-based disease. By contrast, Malkawi studies and develops models designed to improve the ways large structures — from buildings and airports to cities and infrastructure systems — operate, in an effort to make them more energy-efficient and ultimately resource-neutral.

Despite the differences between Zhuang’s research into the microscopic natural world and his focus on large, human-made structures and systems, they learned in preparing for the talk that their work had much in common.

“Both of us actually develop tools. Both of us work with accuracy-related issues. Both of us analyze live systems,” Malkawi said. “In my case, I analyze buildings and cities. What she does is try to unveil the mysteries of life and disease. In my case, I use algorithms to look at buildings and cities as living systems. In her case, she uses them to look at processes in cells in animals and human beings. At the end of the day, what we both are trying to do is visualize the invisible.”

Read more about the event here.