On Tuesday, April 3, 2018, the CGBC’s Harvard HouseZero, an ambitious living laboratory and prototype for ultra-efficiency, was officially commissioned during a private ceremony in Harvard GSD’s Piper Auditorium. Event participants included Drew Faust, President of Harvard University; Alan Garber, Provost of Harvard University; Ali Malkawi, Founding Director of the Harvard Center for Green Buildings and Cities, and Mohsen Mostafavi, Dean of the Harvard Graduate School of Design. Representatives from the Evergrande Group were also in attendance, as were friends of the CGBC, and numerous Harvard staff, students, and faculty.

Ali Malkawi opened the proceedings by reminding the audience that “the house itself is not the point.” While HouseZero has unprecedented energy performance goals, the primary goal was to create a highly configurable, data-driven infrastructure, which will allow the CGBC to conduct research, ask questions about other structures, show what’s possible, and lead in innovation. Similarly, Drew Faust remarked that HouseZero is “something more than a house”—it’s a laboratory. “It’s a home for faculty and students devoted to the kind of rigorous analysis and effective action that resulted in HouseZero itself,” she said. The event concluded with a ceremonial ribbon cutting, and a live rendition of “Inauguration Theme and Fanfare,” a musical piece written by CGBC affiliate faculty member Jerold Kayden. 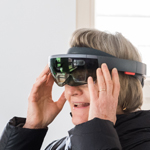 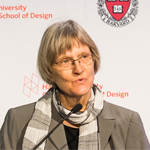 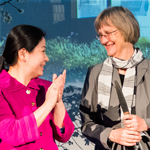